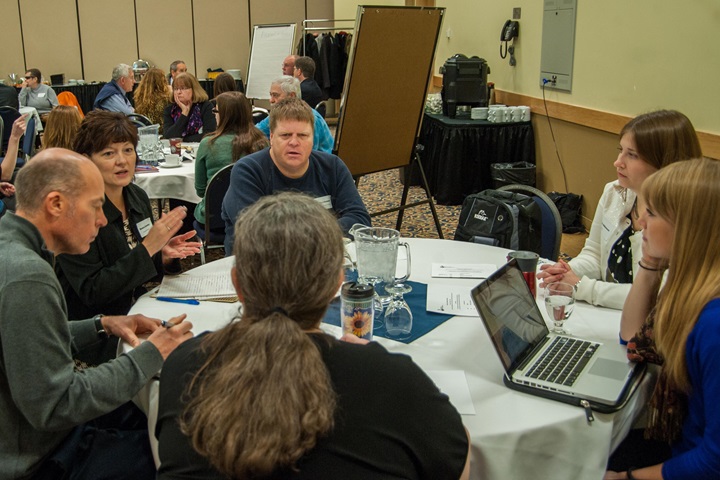 The one-day workshop, held October 31 in Regina, was organized by Elections Saskatchewan and facilitated by Virginia Atkinson of the International Foundation for Electoral Systems in Washington, D.C. and Dr. Jeremy Rayner of the Johnson-Shoyama Graduate School of Public Policy, with campuses in Saskatoon and Regina.

In addition, according to the 2006 Census, about one in 20 people in Saskatchewan are aged 80 or above. As people age, they are more likely to acquire physical, sensory or intellectual disabilities that could impact their ability to vote without accommodations.

These statistics emphasize the growing importance of access to the electoral process for all citizens.

“The legal framework of Canada allows for equal participation, so policies and procedures are the main avenue to address in order to increase access to the electoral process,” says Atkinson. “Elections Saskatchewan has already taken some steps to make this process more accessible. Areas for future improvements include updating policies, ensuring training for election workers, having physically accessible voting stations, studying a vote-at-home option, and generating public education and messaging that more effectively reaches citizens with disabilities.”

The workshop included a review of Saskatchewan’s current legislation and recommendations for future changes, as well as building on the accessibility improvements made in the 2011 Saskatchewan General Election. International standards and best practices on voting accessibility were also discussed.

Workshop participants included representatives from several organizations, such as:

Besides the workshop, more than 200 other disability and seniors groups were invited to participate in this process through a combination of focus groups, interviews and written submissions to Elections Saskatchewan on specific topics as well as general ideas for improvement.

“We’re laying the foundation for improved accessibility for the upcoming 28th general election,” says Dr. Michael Boda, Chief Electoral Officer, Elections Saskatchewan. “Ensuring that all citizens are easily able to vote is a priority for Elections Saskatchewan. Engaging citizens with disabilities and seniors groups in this process was valuable for us as we now begin creating an implementation plan for improved accessibility in the next general election. This includes an accessibility audit for potential voting stations and training of election officials on ways of facilitating voting for persons with disabilities.”

Elections Saskatchewan is the province’s nonpartisan, independent election management body. Given a mandate from the Saskatchewan Legislative Assembly, it organizes, manages and oversees provincial electoral events.