February 11 – There are 75 new Canadian citizens residing in Saskatchewan today, following a citizenship ceremony in Saskatoon.

Dr. Michael Boda, Saskatchewan’s Chief Electoral Officer, participated in the morning event by congratulating each of the new citizens and delivering a welcome speech to the group.

“This is an important day in their lives, a day that marks a new beginning as Canadian citizens,” says Dr. Boda. “After witnessing today’s ceremony, I am all the more convinced that Saskatchewan’s destiny remains in excellent hands as these new Canadians contribute to it in the months and years ahead.”

Citizenship ceremonies are organized throughout the year across the country by Citizenship and Immigration Canada. Since April 2015, 4,819 Saskatchewan residents have received their Canadian citizenship.

“The right to vote is a fundamental right of citizenship. I encourage all new Canadians who are Saskatchewan residents to cast a ballot on April 4. I also encourage everyone to take part by working in the election and helping administer the democratic process,” Dr. Boda said. 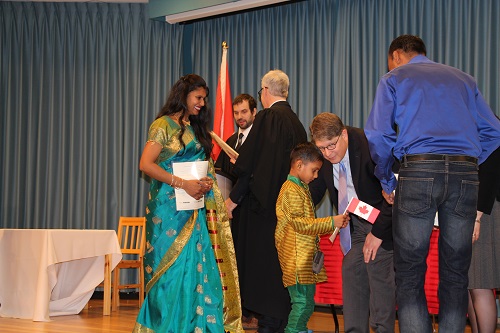 Saskatchewan’s provincial election is April 4. It will be Saskatchewan’s largest event, involving more than 815,000 eligible voters. More than 10,000 people will be hired to work election day at voting places across Saskatchewan’s new 61 constituencies.

Elections Saskatchewan is the province’s independent, impartial, professional election management body. Given a mandate from the Saskatchewan Legislative Assembly, it organizes, manages and oversees provincial electoral events, including the April 4, 2016 general election. Information for voters, workers, media, candidates and parties at www.elections.sk.ca.